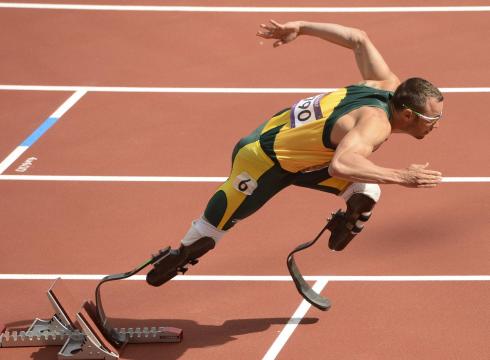 Of all the inspirational stories that emerge from the coverage of the Olympics, the one that caught my eye a few days ago was that of Oscar Pistorius, of South Africa. He is called the Blade Runner, using prosthetics in place of both of his lower legs and feet. Oscar is quite literally a runner without legs. If that doesn’t inspire someone, what will?

He was born without fibulas and was not even a year old when his legs were amputated. Think about the kind of life he probably had, growing up. It’s hard enough to live in the hard world with all your limbs. And still he had Olympic dreams. He still knew that he could do more, even without his legs. And luckily, we do live in this hard world, because it enabled him to find a way around his “handicap.” Building him some prosthetic legs put him on the path to greatness. If only it could work like that for everyone with the Olympics in their sights.

Pistorius worked hard and has to have tons of natural talent in order to get where he is today. But he also has to be incredibly lucky. Not every double-amputee with or without prosthetic limbs ends up in the Olympics. He is lucky that he has the money to afford his state-of-the-art legs, and to replace them when necessary. He’s lucky that his case was reviewed and ruled in his favor to allow him to compete in this year’s Olympics. It can’t be easy for him. Why don’t you try running with no legs?

Yet there are still bitter critics saying that his artificial legs give him an unfair advantage; they give him spring in his step that other runners don’t have; they reduce his fatigue because there are no muscles there to use up oxygen and make him tired. But if he had such an advantage, wouldn’t there be more amputees running as fast as he is?

It might be easier for people to yell “unfair!” than to admit that their guy will get beat by a runner with no legs. We want everything to be equal and fair, but that’s not how the world is. It’s not even fair for the people who do have their legs. Some of those runners have had better coaching, or are in a geographically more agreeable country or city. Some athletes are better off financially and can concentrate on just running, while others are trying to hold a job and provide for a family. People aren’t going to come from the exact same circumstances, so can’t we call it unfair for everyone? Can we kick everyone out who we think is too old or too young, not allow someone to compete because they had more time to practice than we did?

His artificial blades were proven to not give him any extra spring. They are shock absorbing, like many running shoes claim to be, but they do not add extra power. I’m sure with today’s technology rapidly advancing, that power boost may  not be far behind. But of course, the Olympic committee would shoot down a competitor with a power boost in their feet, just as they would someone who takes performance enhancing drugs. There is obviously a line between artificial feet and rockets for legs.

It would not be easy to learn to walk on blades and certainly not easy to run fast enough to qualify in the Olympics. Whatever “advantages” this guy has, it is not his feet.  I salute him. I hope he runs the best he can and keeps up with the best of them. I hope he wins medals and proves to everyone that you can achieve dreams even with disadvantages like the loss of your legs. I hope he becomes an inspiration to other amputees in the world, and those who are trying to overcome major challenges in their lives. I do not, however, think that he should be able to compete in the Paralympics after the London Olympics. If he has the chance to prove how great he is now, he shouldn’t need to prove himself again, or against other amputees. He earned the right to compete in the Olympics and he deserves that. But no one else gets two tries. Now that is what is unfair.

As technology continues to improve and we become better able to make limbs for amputees, and give people the chances that they wouldn’t have otherwise had, we’re going to have to keep re-evaluating what is “fair” and who has the “advantage.” It is a continuous process, just as everything else dealing with rising technology is an ongoing process. With everything in a state of constant change, nothing is going to be cut and dry forever.

Oscar Pistorius proves that someone without legs can run in the Olympics. Hopefully this will open doors for others like him and we can continue to be supportive of all athletes who work hard and persevere through all the obstacles they are given.

And if he can run races in the Olympics, without legs, I can surely get off the couch and hit the gym once in awhile. Like I said, truly an inspiration…