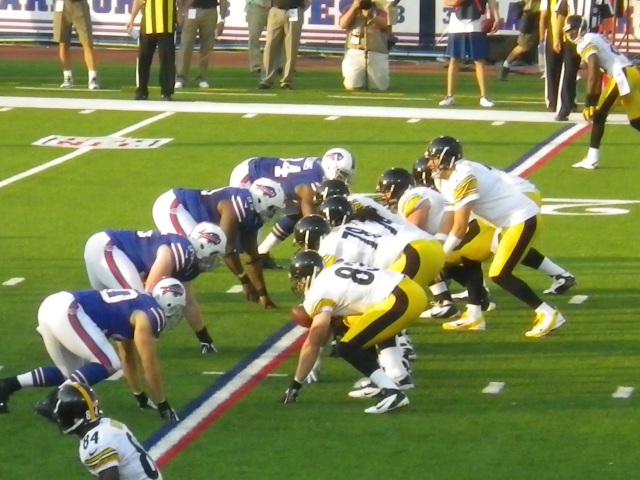 If you’ve never had the opportunity to watch your favorite sports team play at an away game, you should make time to do that right now.

Two weekends ago, I visited my boyfriend in Buffalo, New York and we saw the Steelers play against the Bills. It was only my second time going to a Steelers game, I believe, and my first time seeing them away. You see, when I was younger, I was told the Pittsburgh Steelers games get really rowdy and there are too many drunk guys who get so worked up about an incomplete pass or a sack that it’s not morally a good decision to take young children to games. Not to mention that the tickets didn’t exactly sell like $12 Pirates tickets– so with limited funds and a straight moral compass, I just hadn’t gotten to go to many games.

But there I was in Buffalo, wondering what it would be like to wear my Steelers jersey. I told my boyfriend he had to defend my honor, even though he was a Bills fan. I was also thinking about the fact that my jersey was slightly out of date. Randel el officially retired this summer and is no longer on the team. But the good thing about being at an away game, I thought, was that few people would even realize this fact. So the jersey stayed on.

And good thing it did, because after we parked in someone’s front yard near the stadium, I saw almost as many Steelers jerseys and Terrible Towels as I did Bills fans. It was like I’d found long-lost family. With every interception the Steelers caught and every touchdown scored, the Steelers fans grew louder. After half-time, Bills fans left the stadium in droves and Steelers fans outnumbered them in their own city. You could look across the stadium and see crowds of black and gold with yellow towels waving proud. I was high-fiving the 7-year-old kid next to me and making bets with the couple behind us (all of us Steelers fans of course). You could hear “Here we go Steelers, here we go” resonating from the end zones. It was quite a sight.

But what was also amazing to see was the level of pride the Bills fans showed. Excuse my telling the truth, but we all know the Bills haven’t had the greatest track record. But despite the fact that they showed up to the game knowing they would inevitably lose, they did still show up, they wore their jerseys, they painted their faces, they cheered for their lone touchdown in the first quarter, and they brought their kids to pass on their pride to the next generation. They weren’t sore losers, they probably just left after half-time because the kids needed to go to bed (it was Kids’ Night, that’s why there were so many there).

There was a young man in the front of our section who started the wave. Now, I’ve been at sporting events where one wacked-out guy tries to start the wave (dude with the crazy wig at Penguins games, this would be you) and it never truly works. You get two or three sections that follow along but it’s always brought down by the people who are actually dedicated to watching sports and the people with so much food on their lap they can’t stand up anyways. But not at the Bills/Steelers game. This guy started this wave and the entire stadium joined in. I wish I could say every single person, but that’s probably not true–but it sure looked like every person if you saw it. It went around at least ten times, flawlessly. Granted, the Bills fans at this game were not interested in the game since they were already losing by at least two touchdowns. So it was seriously awesome seeing all of these people, who don’t know each other, who aren’t from the same city, and who probably wouldn’t like each other if we were all to meet, standing up as a single “wave.” There might have been a major play that occurred during this wave time and I’m sure not many people noticed. I sure didn’t, I was too enthralled with the fact that people really just want to be a part of something. And especially when their team fails them, it’s fun to be a part of this crowd, this “family,” for a few minutes. For a few minutes, doing the wave, we all had something in common.

Everyone was so into it, that when it finally died, this crazy wacko started doing a slow wave (kind of like a slow clap). And we all did it. It didn’t make it all the way around the stadium because I’m not sure the other side knew exactly what we were doing. But our side of the field raised our hands in slow motion and sat back down in slow motion and watched the next few sections to our right follow suit. Talk about crowd mentality. We’re all doing something just because all the people around us are doing it, but we like that sense of belonging.

As we left the stadium, I got high-fived by a couple other Steelers fans and heard all the ruckus they were making, in true Steelers-fan style. The Bills fans walked out calmly, not bitter, not angry at our celebrations, because they still had a good time. They still supported the team they grew up with and love, and they all did it together.

This is a Steelers nation and you will find Steelers fans across the U.S. in practically every city. And we are all proud and we all bleed black and gold. So I do think you should go see an away game. I think you should experience the camaraderie, the feeling that you’ve found family far from home, people that you can high-five and cheer with. And hopefully you’ll find great people from the enemy’s side, who also find that camaraderie, just in being at a football game. But if you’re going to a Steelers game, I wouldn’t recommend going to Cleveland–you’d probably have a whole different experience.