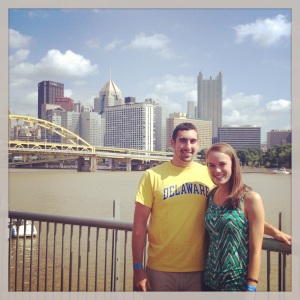 A relationship is one spectacular journey. It is putting one foot in front of the other, sometimes uphill, sometimes down. There are rocky pathways and blue skies and lessons learned along the way. My journey has so far taken four years, side by side with the most amazing person I know.

When I was in high school, if someone told me I’d someday be dating someone for over four years, I’d say they were crazy. Back then, we thought that four months was a long time. In high school, you think the person you like to spend time with will become the person you date and then the person you marry, but the whole relationship escalates in just a few weeks and then there’s nowhere to go, so you both explode in an earth-shattering fight and call the whole thing off.

But real relationships are different.

The whole point of dating and being in relationships is to meet someone with whom you’d like to spend the rest of your life. Ultimately. Maybe some relationships you see as fun, easy and noncommittal, but the true goal in the end is to find one person in the world that you are compatible with. Someone you won’t want to kill at the end of the day. Someone who can make you smile and laugh. Someone who is permitted to see your true, unguarded self. Someone you want to tell all your secrets to. Someone who can share your dreams and celebrate your successes and plan for the future.

After four years, do I think I’ve found that person? Perhaps. Like I said, I never thought I’d date someone for four years. Maybe because I didn’t think I’d find this person as soon as I got to college.

A lot can happen in four years.

A person completes high school in four years–and we know how much change is involved with puberty. A person completes college in four years (hopefully)–transitioning from a guided life to the real world. Couples have multiple children in the span of four years. People finalize divorces. Some folks travel and see the world. People join the Peace Corp or take a turn in the army. Four years is the span between Olympic games, when a person can emerge from a nobody at the bottom to the all-star winning medals. People get new jobs and are promoted after four years. The President completes his term in four years. Every four years, we mark February 29th on the calendar. A laptop lasts about four years, if you’re not an idiot.

Four years can be full of changes and lessons and turning points. And for us, it was.

We grew up together. And this is our story:

In college, we met on the swim team and became best friends. We watched seasons of dumb TV and ate meals in the dining hall and went to parties, and had long inebriated talks about life. We started dating. We saved Sundays for date night, we studied, we laughed, we partied, we swam. We struggled with swimming and then we stopped swimming. We broke up and we got back together. We cried, we laughed, we yelled, we fought. College is where we fell in love.

We moved home, away from each other. We called, we texted, we skyped, we visited. We struggled to communicate. We travelled and explored and stayed in hotels. We went back to school for visits and shared our separate adventures. We took pictures. We talked, we argued, we laughed, and we figured it out. We accepted unpaid internships and entry-level job positions. We learned to save money. We made new friends and met new people. We lost jobs and hope. We made plans.

We moved in together.

We moved away from our parents, we combined our stuff and applied for jobs. Now, we cook, we clean, we share a closet. We buy groceries, watch movies and more dumb TV, and we sit on the couch drinking wine. We still talk and laugh and cry and argue.

But we grow. And that is what four years is to me. That is our journey.

We have become who we are together and we continue to figure it all out. I get to wake up next to him in the morning and come home to him at the end of the day, and that is the best part of it all. It’s not always easy. But the journey continues, and it’s worth it.

2 thoughts on “A Snapshot of the Past Four Years”