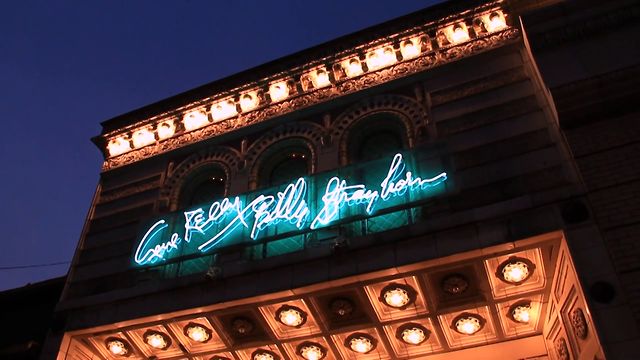 Last night, I was honored and privileged to attend the Evening of Arts for Autism at Kelly-Strayhorn Theater in Pittsburgh. This event truly brought my experiences with the Joey Travolta Film Camp and Arts for Autism full-circle, and I have never seen this amount of hard work, joy, patience, and hope in any group of people, multiplying with each gathering.

It was only last summer that I had the chance to work with the Joey Travolta Film Camp for two weeks, guiding the younger kids and offering my ideas and inspiration as one of the group volunteers. This was when I met Carolyn Hare, the director of the camp, the person who started it all, and brought Joey Travolta himself here to Pittsburgh to give the kids a way to express themselves without judgement.

For a reason that I am still at a loss to explain, I was immediately drawn to Carolyn and the camp and every person involved, who are simply trying to give these kids with autism something better than what they’ve been getting in public schools and camps. They are just trying to be fair, nonjudgmental, and motivational. Their message seems to resonate with me, because it doesn’t have to just apply to children and teens with autism. Everyone should have the opportunity to discover new passions, to learn new skills, and to be themselves. But when you watch these kids at the camp, getting involved and being accepted, you can see on their faces that it means something. You can see, right there, that you are doing something good.

Carolyn Hare is one of those people who reaches for the stars and comes back with the moon. You can tell the moment you meet her. She’s had this dream to grow the Film Camp and the community involved with Arts for Autism and last night was proof that her dream is coming true, and at the same time, she is helping so many young people find theirs.

I was not involved in the early years of the Joey Travolta Film Camp, but everyone whom I’ve talked to has said that this camp and the support for it have grown immensely in just a short time.

At the Evening of Arts for Autism, there were dozens of people who came to enjoy the show, donating time, dollars, and energy for a good cause. The money raised from last night’s event translates into scholarship funding for students who will attend the Film Camp in the summer, allowing more children to benefit from Joey Travolta and his gang.

The evening started off with cocktails and hors d’oeuvres while everyone bid on silent auction items, like movie posters, chocolates, kayaking lessons, pottery and jewelry and more, donated by local groups and businesses. The show itself was really four shows in one, plus a film. First we heard fabulous a cappella from a barbershop quartet called Studio 4. Next, Film Camp student, Dima Harmon performed Alexander Scriabin’s Opus 9 No. 2 Nocturne for Left Hand. Right before intermission, we watched the Film Camp documentary, reliving the camp days where the kids learned the art of filmmaking and were interviewed by Joey Travolta.

After dessert and more cocktails, we were awed by Pittsburgh illusionist and magician, TJ “Magicman” Hill, who made rings and lemons disappear using what I can only call true magic. And finally, aerialist, Kelsey Keller, spun and hung and twisted on silk ropes, amazing us with her acrobatics. City Councilman Dan Gilman served as emcee for the night, proclaiming his support for the Film Camp and everything that Carolyn is doing with Arts for Autism.

From the look on Carolyn’s face and everyone around her, I could see that this was a successful night. Several kids will be able to attend the Film Camp this summer, who might not otherwise have been able to afford it, and perhaps their lives will be changed as mine certainly has been. They will learn that anyone can do anything if they are given the opportunity and have the determination. They will make a movie and have pride in everything they have accomplished. They will attend the the premiere and invite their family and friends and the word will spread. And when people learn of their success, they will come back to Evening of Arts for Autism to support more students and Carolyn and the growing need for a little bit of hope and inspiration in our community.

One thought on “An Evening of Arts for Autism”