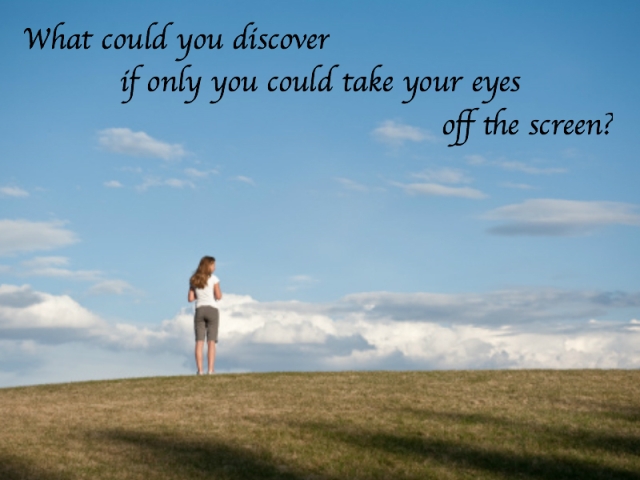 I have been on Facebook for almost nine years. But on March 5th, I decided to take a short break. I gave up Facebook for Lent– 46 total days, from Ash Wednesday to Easter Sunday.

It was more than just giving up a social media platform though. It was a conscious decision to avoid what had become a daily, almost hourly, rote habit, wasting a colossal amount of time and energy. I wanted to know what I could discover if I could only take my eyes off the screen.

I gave up endlessly scrolling through my news feed and clicking through photos and watching crappy cell-phone videos and posting useless status updates. I gave up what I considered to be the drama that comes with having your entire life on display for so many years that you don’t even remember what it was like to have a secret or a memory that only you know or a precious photo that no one else has seen.

When I chose to give up Facebook for Lent, I thought maybe it would make me a better person. Maybe stepping away from my personal social media would give me a better perspective on friendships, relationships and family. Maybe I would pick up the phone and call someone. Maybe I would spend time with people face-to-face (gasp!). I had been scrolling through my news feed so often that it was an addiction. I needed to see what everyone else was up to, where their lives were taking them. And in doing so, I was constantly comparing myself and my life to everyone else’s. All 654 of my “friends” were stacked against me – have they travelled more? are they in a better job? is she engaged already? why are they living their dreams after college and I’m still in my hometown?

I was losing sight of the good features of this social media platform and getting too wrapped up in the daily monotony that is actually the worst part of Facebook. People used to reconnect on social media, rekindle old friendships and share major life experiences. Along the way, they also started to post pictures of what they ate for lunch and complain about the traffic on their way to work. They post snippets of every part of their lives, that the world doesn’t need to know. People started cluttering the news feed to share which Disney princess they would be or which city the BuzzFeed quiz thinks they should actually live in. Somehow, people decided that these dull and repetitive details were interesting.

And I was falling for it. I clicked through photos and updates like I cared. But I actually just couldn’t help myself. There was and is an innate need to know what is going on.

Back in the day, people just talked to each other and gossiped. They got their news and information by peeking over to the neighbors and then spreading the word to their friends over tea. Then they filled newspapers with stories and information. It has only progressed since then. The medium is different, but the reasons are the same. We want to know, and we don’t want to be left out.

At first, giving up Facebook wasn’t hard. I moved the app on my iPhone to the last screen and I didn’t touch it. I was still on Facebook for work, managing our clients’ pages and posting for them, but that was different from signing in to my own page. There’s no addiction or habit to the company pages that we manage. I have no friends there I’m trying to follow.

Soon, though, I found myself substituting other social media for the Facebook I was missing. I scrolled through Instagram instead. I pored obsessively over Pinterest and fleshed out my Boards. I tweeted more often and read articles on LinkedIn. Without even realizing it, I was desperately trying to find ways to keep social media in my life.

I didn’t save any time or energy by getting off Facebook. I didn’t magically become this person who hangs up the computer and instead takes walks, plays board games, has coffee with friends and listens to the birds chirp. I constantly worried that I was missing something, not just little things, but big things too, because even the people you are good friends with really don’t call or talk as often anymore. They figure everyone is on Facebook, so they’ll share the big news there and you’re bound to see it.

The most important thing that I confirmed is that social media is here to stay. These social media platforms may change and evolve, but people will find a way to be in the know all the time. We may think that we can just drop it, get away from the connected-ness, and live the better, simpler way, but we cannot go back. Once this has been engrained in our lives, it is here for good.

There are still things to be learned from social media. We can still make connections with old friends and rekindle forgotten relationships. We can congratulate engagements and new babies and share milestones. This is the reason that social media has become so important. But there is balance in life, between keeping up with everyone else and doing things just for you. While we may not be able to get away from Facebook completely, there is a bigger world out there.

In 46 days, I did miss a few big things. But mostly I missed the silly, day-to-day updates that I don’t care about anyways. I un-friended a few people (sorry if it was you). I became fully aware of how awful and time-consuming and petty and overly dramatic the whole thing is. But I also realized I need to be there. I need to be connected with my friends and I need to share my big moments, because this is the world we live in.

When I got back on Facebook, I scanned the news feed, looking for the end of the world. I didn’t find it.