Last weekend, Jim and I visited the famous Fallingwater house, designed by the architect Frank Lloyd Wright for the Kauffman family in 1939. I promised myself I would write a better description of the house since we weren’t allowed to take pictures during the tour, and I want to be able to hold an image in my mind of this lovely, magical home.

When we arrived at Fallingwater, there was an open, outdoor visitor center, where we checked in with our ticket and had time to walk around and find out more information about the house. Since we were early for our tour time, we explored the gift shop and looked at the trinkets, decorations, books, and memorabilia that were most definitely overpriced. Then we went over to the Fallingwater gallery to read about the renovations that have been done on the house to repair the crumbling structure. There were descriptions, photos and examples of the different materials that were used in the original construction as well as what is used to renovate it and make it more structurally sound. I was amazed at how much time and work has gone into the house since it was entrusted to the Western Pennsylvania Conservancy in 1963. It seems like there is an exorbitant amount of work needed to be done, even now, to make sure that the house is able to remain standing and stay open to the public. I couldn’t help wondering if it might not be better to just leave it be. I’m sure that engineers today are able to construct a similar house, positioned over a waterfall, with beautiful views, and it would be structurally sound and last thousands of years. But during the course of the tour, I was shown the true beauty and significance of the house, and why it is so important to keep it intact.

At the start of our tour, we walked down a long gravel driveway, through the woods, and the house appeared in front of us just beyond some trees and hedges. It looked much smaller than I had imagined. The professional pictures of it make it look massive and awe-inspiring. But this was just a tiny house, albeit interesting to see. 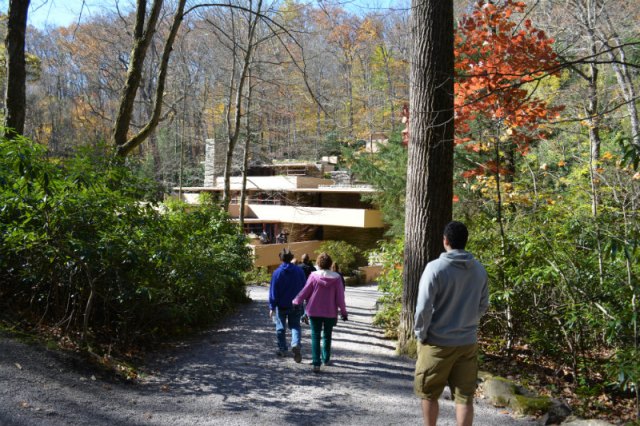 The front door was tucked back around the side of the house. The guide said that Frank Lloyd Wright liked to make doors hard to find, really set back out of the way to make it more exclusive. We walked in and entered the large living room/dining area. The floor and walls were made up of large flagstones that had been quarried on the property. The floor has been pulled up to add more supports, but when they renovated it, they numbered each stone before removing them and put them back exactly where they were to keep its originality. The living room is part of the cantilever that they told us is used throughout the house, so it extends out over the river and waterfall. To one side of the room, there were steps that led down right down into the river. There was glass pulled up over the stairs so that it wouldn’t let drafts in when it was cold (and no one could tumble into the river), but they could be one with nature and walk right into the river whenever they wanted. The room had built-in furniture with original upholstery, wood and fabric. The couches, bookshelves and desks were all cantilevered so there were actually no legs holding anything up. There were several different seating areas and a huge stone fireplace with a hearth built right into a boulder on the hillside. The three walls facing the water were all glass and since the floors were cantilevered, they didn’t need the corner supports. So the corner windows offered a beautiful “unobstructed view” to the outdoors.

We were able to peek into the kitchen, but we couldn’t walk through. It was plain and the guide said that the kitchen wasn’t designed by Frank Lloyd Wright, only the space for it. The actual kitchen appliances, cabinets and things were put in by the Kauffman family. When we left the big open space of the living/dining room, we had to walk up narrow stairs and down a narrow hallway to get to the first bedroom. The reason the hallways were so narrow was to get people to have the refreshing feeling of coming into more open space in the rooms and outside on all the terraces. The first room we saw looked plain and unfinished and we found out it was because they were in the process of repairing it but wanted to keep it open to the public so that we could see the damage to the walls and floors and the process that it took to keep the house intact. The room seemed pretty small to me. It had a built-in desk, cantilevered of course, as well as a built-in wardrobe along the wall. If there had been a bed it would have only been a twin-sized bed. There was a wall of windows looking out to the terrace and the terrace was about twice the size of the room. Frank Lloyd Wright really wanted people to be outside and enjoy the space and openness.

After the first bedroom, which they said Mr. Kauffman Senior would have used mostly, we went to the master bedroom, where Mrs. Kauffman stayed. It had a larger bed and the most ornate fireplace. It was a corner room, so it had the “unobstructed view” through the corner windows again. The terrace was again very large and offered a beautiful view down the river from the waterfall and into the forest. Each bedroom had its own bathroom all lined with cork, from floor to ceiling. The cork in the bathrooms had had to be replaced over the years, but we were still able to see the damage in some places.

We went upstairs to the third floor where Mr. Kauffman Junior had stayed. He had a large bedroom, which he had converted to a library with extra bookshelves, the only furniture that was not cantilevered. He had a large desk and a wardrobe, but he had moved his bed down the hall to a little alcove, just big enough for the bed and surrounded by windows looking out onto the third-floor terrace.

After the tour of the Kauffmans’ main house, we exited out a back door and walked up the hill to the guest house. The guest house was built after the original Fallingwater, so although it has the same style and elements, it is not built over the waterfall and does not use the cantilever construction. The living room looked very similar to the main house, with large windows, stone walls and wood furniture.  A short hallway led to the only bedroom, then through the bedroom was  an outdoor patio area with a pool that was currently under construction. I would have absolutely loved to have been one of the Kauffmans’ guests and retreat to this cottage in the woods with a pool and beautiful views of the river.

Next we saw the carport area, where two of the three original spaces had been enclosed to create the room where we concluded the tour. Our group gathered and watched a short video about the house and the work done by the Western Pennsylvania Conservancy. After that we were free to roam the grounds and take pictures of the exterior. 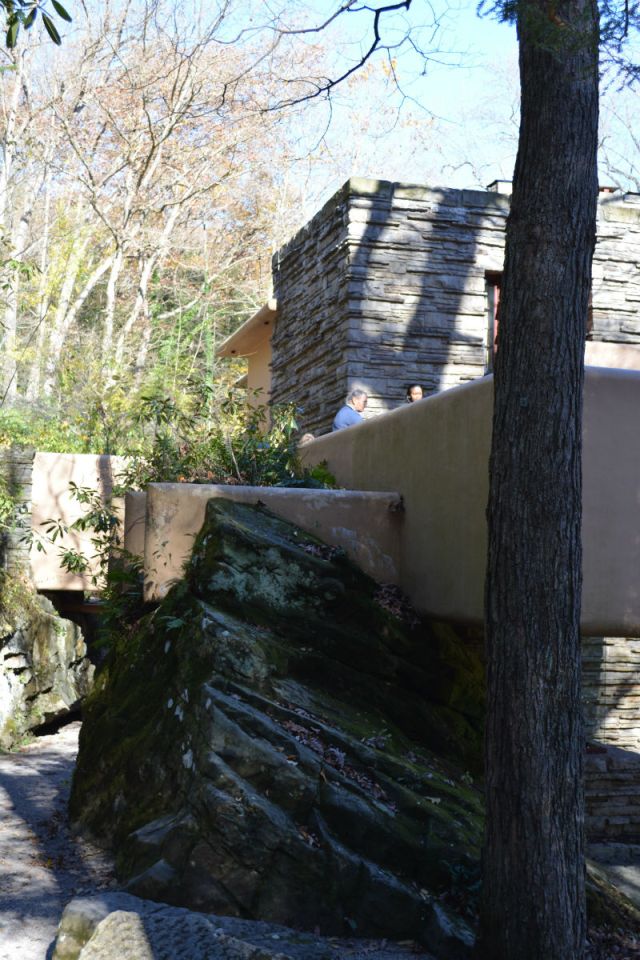 Having toured this famous home, I now realize how special and unique the structure actually is. If this house was left to nature, it would surely collapse, and no one would ever be able to replicate it. What makes it interesting is not just the fact that it’s built over a waterfall, although that is pretty remarkable in itself, but also the structure and the purpose of it. The whole cantilever design, where each floor of the house is anchored on one side, but extends out over the waterfall, unsupported, is amazing. Not to mention the fact that Wright took it one step further and made everything else cantilevered as well. He designed this house with a purpose – he wanted to incorporate nature into daily life. His organic architecture blended art and nature in a very real and unique way that no one had ever imagined.

Since the house and all of its original contents were left exactly as they appeared in everyday life, the tour of the home is even more meaningful. Everyone who visits can enjoy the house as the Kauffmans would have many years ago.