Whiskey would not be my drink of choice, especially not served neat or even on the rocks. But as I sat amongst the whiskey barrels and the copper stills, I felt this air of sophistication and this feeling that, yes, I could be the girl who orders whiskey. I could be the one who sits down at a bar and orders it straight up and knocks it back, enjoying the harsh bite as much as the oaky flavor.

But no. I’m decidedly not that whiskey-drinking girl. But I was pleasantly surprised at how much I did enjoy our tour of the Wigle Whiskey Distillery located in the Strip District of Pittsburgh.

Our University of Delaware Alumni Club hosted our December event at Wigle Whiskey because it was recommended by our very own members. We asked what kind of events they wanted to go to and this was their suggestion. Like I said, I’m not big on whiskey. But for a UD event, I’m down for anything.

So my fellow board members and I contacted Wigle and set up our event to include a tour of the distillery, tastings, and lunch. At a discounted price, you can’t beat alcohol and lunch on a cold December afternoon.

The employees at Wigle were extremely accommodating and wonderfully helpful. When I met them on the day of the event, I couldn’t have asked for a more welcoming staff to greet us and show us around. They introduced themselves and made sure everyone in our group had a drink that we liked as soon as we walked in and hung our coats up. Our tour guide had even gone out of his way to do a little recon on the University of Delaware so that he could throw in fun facts along the tour, like the fact that UD was founded in 1743, and Joe Biden and Joe Flacco are among our notable alumni. I mean, that is quality customer service – know your customers and make them feel at home. 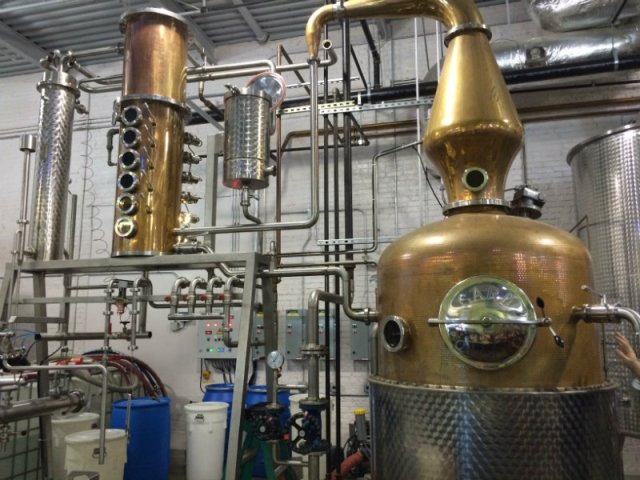 I know way more about beer and wine than I do about whiskey, so I was really interested in the whole process. Our tour took us through the whole thing, from the grains that are used to the fermenting and distillation processes and finally to the barreling and bottling. And in between all that, we also learned a little about the history of whiskey-making in the Pittsburgh area.

Pittsburgh was once the mecca of whiskey. Instead of using their grain to make bread, they decided in the late 1700’s that it would be way better and more fun to turn it all into alcohol. But then the whole Whiskey Rebellion happened and eventually the distilleries closed and went to Kentucky. Now there is just Wigle, founded in 2012, one of the few distilleries in the whole U.S. that produces every product they sell from local, organic grain.

While the tour and story were very entertaining, I was extremely anxious to actually taste the whiskey. Of course I had to drop a few ice cubes in each of my samples, but there is no other time that I’ll be able to taste whiskey like this, where I could compare the five different kinds and actually taste and smell the differences. Between white and rye and wheat, I could taste the subtleties of each but I can’t say that I really had a favorite. I did like the sweetness of the Honey Landlocked though. And I had started the tour with a Hot Toddy cocktail and I would drink that again any day.

You can find out more about the whiskey Wigle makes and sells on their website.

I didn’t end up purchasing my own bottle of Wigle whiskey, but it was cool to find out that they sell their whiskey in a lot of state stores in the area, a few restaurants carry it, and they even sell Wigle near UD and way over in Portland, Oregon.

So next time you’re in the Strip District, stop by Wigle on Smallman Street and get a few samples. And definitely get the Hot Toddy.