I said I had big news and here it is: we adopted a retired racing greyhound! We named her Sadie, for no reason other than we liked it and we think she looks like a Sadie. It would be a cliche to say that she raced right into our hearts – and also untrue, because she doesn’t race anymore and we can hardly get her to run even a little. But she did look into our eyes and melt our hearts (okay, one cliche).

Since today is National Dog Day, it’s the perfect day to introduce her and tell you a little more about her and our decision to adopt a greyhound. 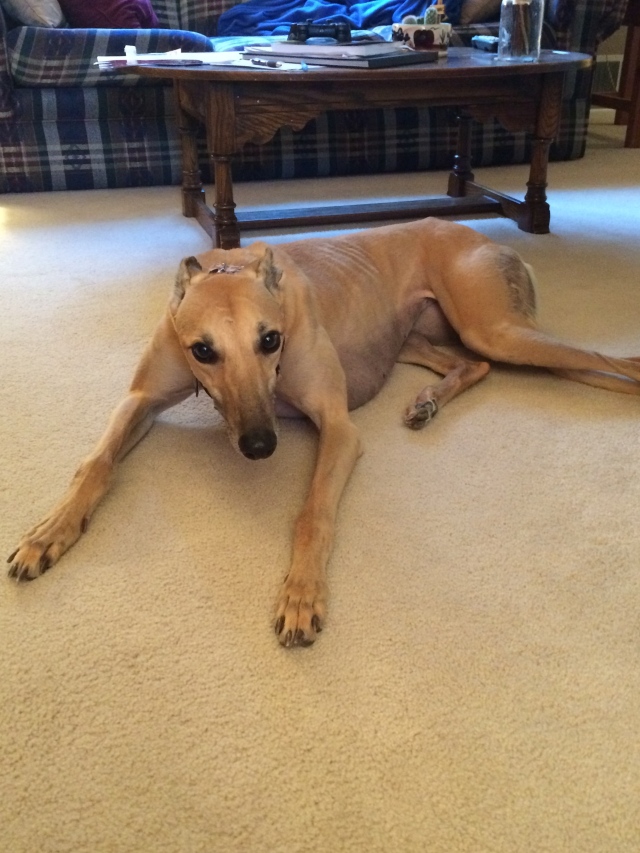 Quite a few people have asked me why I wanted a greyhound. There’s a couple reasons. But first, when I was younger, maybe middle school or so, I did a research paper on racing greyhounds and my research had uncovered a fact that many racing greyhounds can not find permanent adoptive homes after they retire and are put down. I also remember seeing that some, but not all, tracks and kennels mistreated the racers. After these discoveries I felt that I just had to rescue these poor dogs.

Now I know a little better. I’ve done a lot more research recently, as we prepared to adopt a retired racer, and the greyhound group that we chose, Going Home Greyhounds, actually corrected us and told us that we’re not truly “rescuing” greyhounds, that in fact, these dogs are no longer in any danger and that outdated terminology implies that they are. GHG told us, and my additional research has also shown, that greyhounds live amazing lives for their first few years. They are treated well and they get trained to do what they have been bred to do for thousands of years. And they absolutely love it. The industry has changed a lot since the 1980’s. All of the retired greyhounds today are able to find homes after their racing days are over. Over recent years, more information has become available about racing, and people are more familiar with the breed, resulting in more interest than ever in adopting these gentle athletes. Or “45 mph couch potatoes” as they’re commonly known.

When my brother adopted a greyhound in Phoenix about a year ago, I got to visit and meet him, and my decision was pretty much solidified. I knew I was going to get a greyhound. It wasn’t a matter of if but when.

In March this year, Jim and I went to the Pittsburgh Home and Garden Show and we saw a greyhound meet & greet booth and stopped to pet the dogs and learn a little more about the group. It was the first time we’d heard of Going Home Greyhounds, and the difference between them and some of the other groups in Pittsburgh was that they didn’t have a kennel where they housed the dogs until someone wanted them. They fostered every dog before they put them in a permanent home, giving the dogs a chance to learn normal human household things like stairs, hardwood floors, pools, sliding glass doors, sleeping in a bedroom, and meeting other kinds of dogs, kids, and sometimes cats. By the time families get their dog, it knows how to live in a house and is well trained. That really appealed to us, since we both work full time and are first time dog owners. We felt like the pressure to teach and train a dog was taken off of us, and we were more confident that we would get a dog that would fit our lifestyle.

We knew we wanted to wait until after the wedding to make any big moves. After the wedding, we settled down a bit, organized some closets, unpacked some more boxes and then decided it was time.

Two weekends ago, GHG had an adoption event at a nearby veterinarian’s office. I had scoped out the available hounds online, but I was excited to meet them in person. There were 4 dogs there and more people than I expected. We hadn’t started the adoption process yet, thinking we’d just “look” and make sure we were really ready.

We met Sadie at the event. Her racing name is Atascocita Ceil. “Atascocita” is after Atascocita Racing, her owner and breeder.  She raced at Wheeling Island, West Virginia in 58 races and won 6 of them. In other words, she wasn’t very good. Her foster family was calling her Ceil, but when Jim and I told our friends and family about her, they thought we were saying “Seal.” Which seems like a weird name for a dog. So we decided to change it to a name we really liked.

When we met her, she was the quietest dog there. She didn’t seek the center of attention, she was smaller than the boys, and she didn’t get distracted or run to different people. We took the leash and walked her around and she stayed by our side, stopped when we stopped, looked for our guidance, and accepted our petting and affection. After 20 minutes she’d started to warm up to us and was leaning against our leg while we played with her super-soft ears. That’s pretty much when I fell in love. 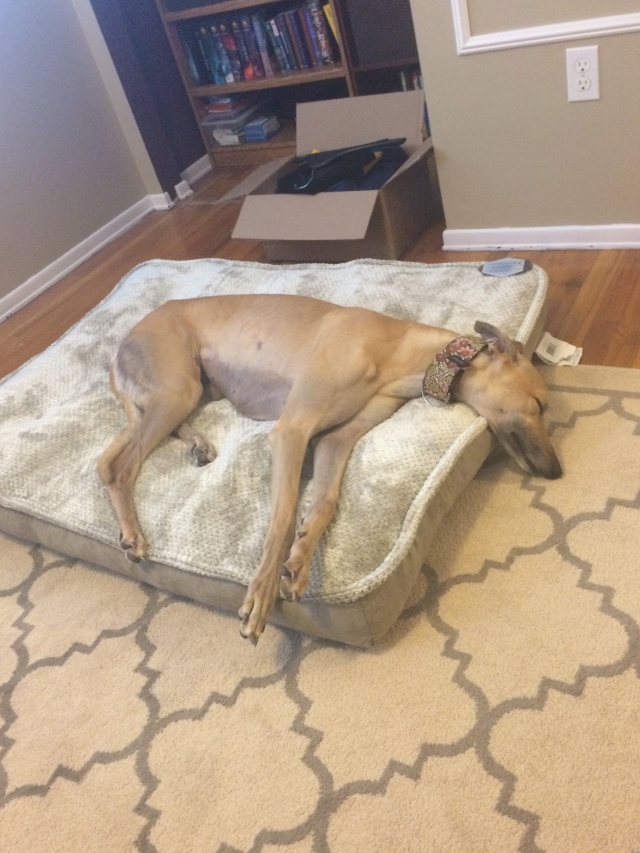 Ten days after meeting Sadie, she was ours. We got lucky – another couple was interested in her but the foster family felt she would be a better fit with us so they held her for us until our application was processed.

Now she is happily enjoying her forever home and I’m sure we’re already spoiling her with beds in every room and treats for every little good thing she does.

It will be some time before she is fully settled and comfortable with our routine, but even after two days we can see her beginning to relax and get more confident around the house.

And obviously I have to end by saying, if you are considering bringing a dog into your life, please adopt. Whether it’s a retired racing greyhound or a mix from a local shelter, there are many, many dogs that need loving homes. Growing up with an adopted dog, I always knew that I would adopt any and every pet I would own.

Greyhounds make wonderful, amazing pets, and they are perfect for us, but they are not for everyone. Do your research before bringing a retired racer into your home. 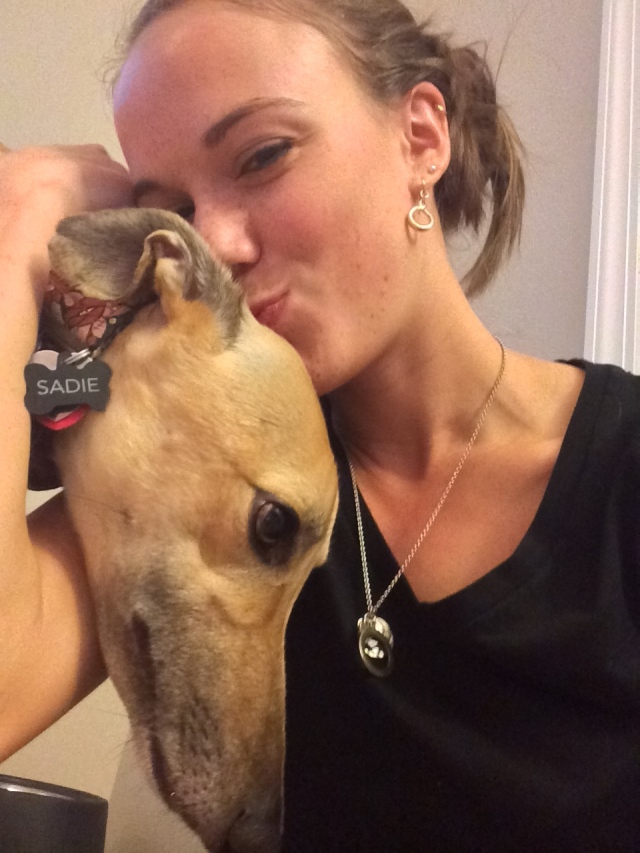 One thought on “Meet Our Adopted Greyhound!”