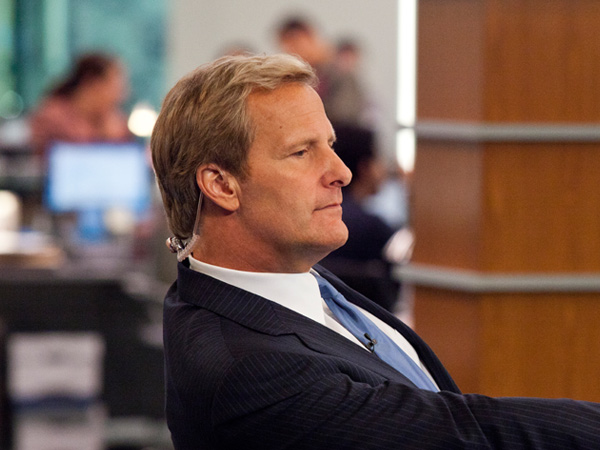 This past Sunday was the series premiere of an HBO show called “The Newsroom.” Now of course, I don’t get HBO on my cable so originally, I thought nothing of it, couldn’t watch it, no big deal. Then I went to New York and talked to my friend from school who said he had watched it and thought it was really good, had texted our professor about it, etc. Well, if there is something worth texting the professor about, then maybe I better watch it. I came across the link to the show on Twitter and clicked. What better way to spend my Wednesday night than diving into a new TV series? So now I’m hooked.

I think I’m drawn to this new series for several reasons. First, it is a drama. I love drama. You can tell right away that there are relationship issues between people at the workplace and that sooner or later it will either be sweet and romantic or it will blow up and get ugly. Yes, it might be predictable and maybe some people don’t like that, but I do. The drama doesn’t stop with the love circles and triangles and hexagons though. There are already major rifts between co-workers. People hate Will. They say he is mean and it is clear no one wants to work with him. But you don’t see that right away because you’re still captivated and boggled by his tirade against America and you see him as all wise and righteous, telling people to use their common sense and not be hung up on the lie that America is the greatest country in the world. But then as you see his interactions with his staff, you realize that that outburst was part of his arrogance. You wonder how his whole news anchor thing will even work if he doesn’t have a staff and in walks his old flame, Mackenzie. Drama.

Second, I love the world of television production. The people who don’t like this show might say that the drama is the same as any other show, just in a different setting. But this setting is one we, as the viewers of television, don’t see. This is a behind-the-scenes look at how the news is produced, at the fast and furious way of life of a news producer. This is the kind of world I have studied, learned and love. This show is dealing with real events and in hindsight, we can re-examine how they played out. We can look back and see how the news started, where it ended up, where rumors came from. The producer of the show, Aaron Sorkin, says now that this real news is behind us, we can see the actual implications. Sorkin says, in the show the news can be changed– “We can make our guys smarter than everybody else” or just luckier. And as far as my experience in newsrooms has gone, this show is pretty accurate. It’s not like a hospital show, where the doctors have sex in corners and gossip in front families, and learn deep, valuable lessons from the simple words of a patient (Grey’s Anatomy–not that I’m bashing the show, I’m actually obsessed with it, despite its obvious inaccuracies).

Third, the show has a hook. It’s not all laid out there before you without any guessing. We’re not sure what the exact history is behind Will and Mackenzie. We can tell that there is tension between Maggie and her boyfriend and we can’t wait to see how that plays out. We can tell that some of the other people in the newsroom, like Jim, are about to play major roles but we’re not sure how yet.

And finally, there’s a little bit of unexpected humor. The news is all death and destruction, this much is obvious. The characters are serious about their jobs, they’re fighting about the staff, contracts are being negotiated–this is serious stuff. And then suddenly someone yells out “Punjab!” and the viewers are cracking up. No one on the show is trying to make jokes or laughing, but it’s adding some relief to a very serious and stressful news environment.

“The Newsroom” is also a rebuttal against all those who say that journalism is corrupt or dying. It is a fight for the truth. It is an insight into a world often criticized because it is misunderstood. And it is hope, that with passion, good sources and good journalism, the news can enlighten citizens, foster honest and fair discussion, and restore the core of democracy. You can’t help but feel moved and empowered watching Mackenzie’s zealous fight to take over and produce fantastic news.