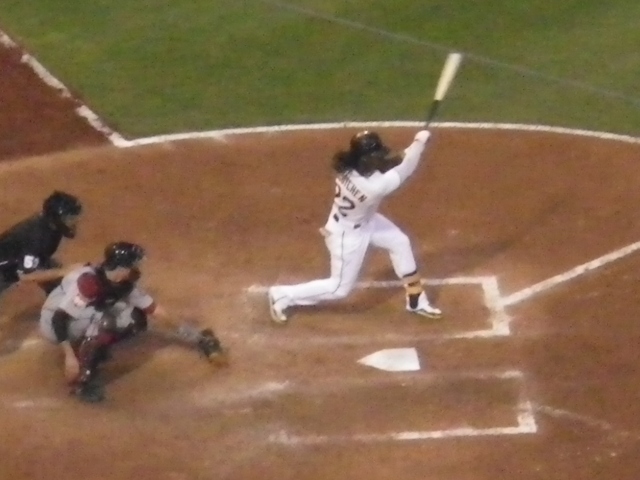 Everyone expects posts about independence today, stories about freedom, tales of dreams fulfilled and promises made. Everyone writes articles about picnics, fireworks and community gatherings at the park. They detail the history of our nation and possibly criticize the society today that has grown away from that history. We see biographies of Thomas Jefferson and George Washington, the founding fathers who had an idealist’s hope for the growth of a free, unified nation. We read the uplifting stories about ways that our country has fulfilled that dream and how far we have left to go.

But that’s not what this post is about. This post is about baseball. Which is an American dream in itself. But it may strike you as ironic that I write about this American sport, since I am not a huge fan of baseball. In fact, I haven’t been to a baseball game in I don’t know how many years. I’m pretty sure one of the last times I went to a ball game, my girl friend and I were painting our nails. I was young.

But then on Monday night I went to a Pittsburgh Pirates game and it all hit home for me. Pun intended. Now, I won’t bore you with facts and statistics about the Pirates. I don’t know them. But I will tell you about the Pirates from the vantage point of someone who bleeds black and gold.

I am always excited at the prospect of going to a baseball game. I am the kind of person who thinks sports are much more fun to watch when I’m actually at the game. The idea of baseball is appealing. It’s relaxing, not too many drunk fanatics, time to talk with family and friends, Primanti’s for dinner, beer and cotton candy. Why wouldn’t anyone like that?

And then I sit down and I’m bored by the third pitch. The batter hasn’t hit the ball and even if he does, the ball is in the air  for about three seconds before it’s caught and the guy is out anyway. The beer is eight dollars, the line for Primanti’s is too long, the bathroom is gross, and the guy with the box full of cotton candy never makes it to row Y of section 325. And of all the seats in the whole stadium, you’re sitting right in front of the one drunk guy who yells very loudly at every pitch, at every batter, at the umpires, at the team on the bench, at the outfielders, etc… (It’s like that old computer game “Backyard Baseball” where the computerized players are yelling “We want a batter, not a broken ladder.” Yes, THAT guy.) Not to mention, you run out of things to say to your family after one inning.

This may or may not be your own baseball reality. But the fact is, most of the time, all that doesn’t matter. And I realized on Monday night that it didn’t matter. Yes, we did sit down and I was immediately bored. And no, we didn’t get Primanti’s  for dinner, my mom had made a delicious meatloaf for dinner at home. But we moved our seats to a quieter section, splurged on a few beers and bonded as a family, watching the Pirates make a come-back.

When people hear that I’m from Pittsburgh, they immediately ask me if I’m a Steelers fan. (I still don’t understand why that is the first question they feel the need to ask. Everyone from Pittsburgh is a Steelers fan. There is no doubt about that, no need to ask that question.) Sometimes that is followed by whether I’m a Pirates fan (never the Pens, which I don’t get because the Pens are pretty good and hockey is exciting, but whatever). And always, someone finds a way to chime in that “the Pirates suck”. I almost always agree with them, but you never turn your back on your team. But this year, something happened and the Pirates are actually winning games. There are actually more than ten people in the stands. We actually hit several home runs and won 11-2 on Monday night. So stop bashing my team. Your football team sucks, but you don’t hear me saying anything.

The level of fan loyalty in Pittsburgh will never cease to amaze me. On a day when we’re talking about unification and dreams and promise, look no further than this city here. Our sports teams will always, always bring us together. Just like Independence Day brings our divided nation together to eat hot dogs, watch fireworks and forget about politics–even if it’s just for one day. With nothing else in common, Pittsburghers can bond over the fact that we all love our football, hockey and baseball teams– even when they’re terrible. And we will root for those teams through thick and thin. Maybe the Pirates went through some rough years (or decades) but every summer, they come back, they try their best and their fans are behind them. And here they are, winning games, hitting home runs, filling the stadium with cheers. Now that is the American dream.

(Alright, this post actually is about uplifting American hopes and promises. Sorry about that.)