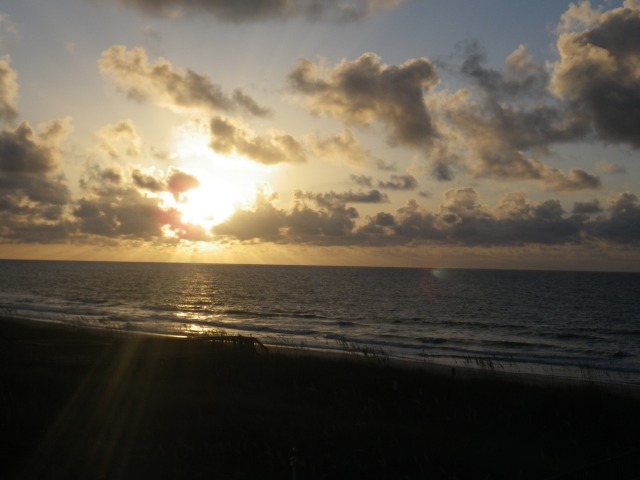 I just got back from my family vacation in Myrtle Beach. It was actually a smaller beach just south of there, called Garden City, but no one would know what I was talking about if I told them that. My family has been vacationing there every summer practically since I was born. My grandparents rent a huge house and we stuff in as many parents and kids as we can. There are 29 people total on my dad’s side of the family and recently we’ve usually had about 20 people in the house (after subtracting the busy kids who can’t make it). We’ve done the same kinds of “vacation-y” things every year. We lay out on the beach, jump the waves, swim in the pool, go goofy golfing (“put-put” for you non-Pittsburghers), play games at the arcade, and browse the cheap gift shops.

For the past three years or so, I keep saying that they might have to count me out of vacation. I kept thinking I wouldn’t be able to take a week off from my summer job or internship, or I’ve just been crossing my fingers that I’ll have something important happening that will start my career or change my life. And for the past three years or so, none of those things have been happening, so I’ve enjoyed all of my family’s vacations. This year was probably our last one because after 20-some years, we are just too big. Family vacations are always fun; it’s always great to get away from life at home (even if my life at home kind of is a vacation right now) and just spend some time at the beach. But we’ve been looking forward to the exact same thing year after year and all of a sudden, you realize that everyone is growing up.

All the families and all the kids used to come down to the beach. Now we’re missing a whole family and a spouse and a couple kids who have jobs. Kids used to be small enough to sleep together in beds or share with parents. But now, some kids refuse to share beds, others are just to big to share. We brought down like six air mattresses this year, because there weren’t quite enough places to sleep. We’ve got kids on the living room couch, some rolling down the hallway. It was just easier when they were babies.

I keep saying “kids” but what I really mean is “kids/teenagers in large adult bodies.” We practically needed to take out a loan just to go out to dinner, because these large adolescent boys can eat. The kitty for grocery money needed refilled more often than it used to. We went through six boxes of Krispy Kreme donuts in two days. No joke. (I am proud to say I resisted and only had one and a half the whole week.)

We used to get tired of the beach when we were little, so our parents would take us to Wild Water and Wheels or the Cheese Maze. But not every parent would want to go, of course, so those were the days when we would throw ten kids in a car, double-buckle and put some behind the backseat of the van. (I’m pretty sure the old “double-buckle” tactic would be highly frowned upon in today’s uptight, car-seat-till-they’re-ten world.)

When we were younger, the parents were very wary of explosive devices (for good reason). I remember the first time they let us have sparklers under the house. It was the best night at the beach ever. And as we got older, we just couldn’t be satisfied with tiny sparks that lasted two minutes. We had to get the big guns, and spend a small fortune on major fireworks that were probably not allowed on the beach anyway. We wanted to sit right next to them and the best part was when they shot off the wrong direction and almost hit someone! And then this year, we mentioned not doing the fireworks thing, especially since we’d just seen them on the 4th of July, and most of us were like, eh, whatever, I just want to get a tan.

And finally, the things we pack have changed so dramatically, I can hardly begin. We used to bring toys and shovels and buckets. We brought a craft box full of paper, markers and stickers for when we were tired of the sand. We brought paint to decorate our collections of shells, and movies that always got lost or taken home by the wrong family. We brought board games and GameBoys and Walkmans and CD players. We brought Barbies and action figures to play with in the car. All of these fun things have been replaced by umbrellas, chairs and shoes. (A pair of shoes to match each of the outfits we wanted to wear out, running shoes for our morning work outs, beach shoes for the hot sand, etc.) We don’t need toys or beach stuff anymore, all we need for entertainment for the whole week is a few books and an ipod. Instead of crafts, we pack chargers– phone charger, camera charger, ipod charger, Nook charger, computer charger. Instead of movies, we bring hair dryers and straighteners and make-up bags. But even though we’ve technically replaced things, we still can barely fit everything into the car to make the trip because we’re just so big! The boys knees are digging into the backs of the seats, their feet near my lap. My seat is pushed forward as far as it will go, but we still have no space because this year we needed three bags of golf clubs instead of one.

We had a great time at the beach, like we always do. We relaxed on the sand with books and ipods, we drank beer and went out to a really great local restaurant called the Hot Fish Club. We played cards and volleyball and got a little sunburned. And 72 donuts and one week later, we were saying goodbye to the beach all too soon. It’s too sad to think that this might have been our last year at the beach…but maybe we just need a bigger house.

One thought on “My Big Fat Family Vacation”