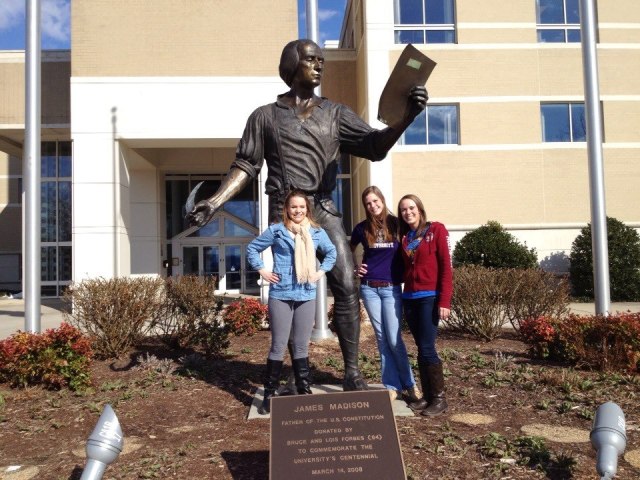 Abby, Lindsay and I with the statue of James Madison

I visited my sister at James Madison University this past weekend.

Let me remind you, tales of my journeys are not to be taken lightly. Traveling and/or driving somewhere new is a big deal for me.

Luckily, I was not alone.

My cousin Abby is a junior in high school. She is at that magical age when you start to look at all the possibilities that are just beyond the classrooms that you begin to refer to as prison cells. But just barely. She thought (or maybe her parents thought) it would be a good idea to check out JMU. It’s easy enough to visit, while my sister is there, so why not?

We drove down on Friday morning. I won’t get too much into my little antics on the drive down–we all know I have trouble with directions. Let’s just say, my parents told me about a “shortcut” (which I guess it was) but apparently my knowledge of geography is lacking. I got a little confused (read: freaking out) when I noticed a sign for Maryland about two hours in. I thought I had somehow driven the entire way across Pennsylvania to get to Maryland. (Who knew you could go from Pennsylvania to Maryland to West Virginia to Virginia within fifteen minutes??? Obviously not me.)

Anyways….we got there just fine.

Since it was Easter weekend, Lindsay said that her roommate and suitemates would be gone for the weekend and were generously offering their beds to sleep in if we needed them.

Two of her suite-mates were still there when we got there, so we got to meet them. They said Lindsay and I are exactly alike. That’s news to me. 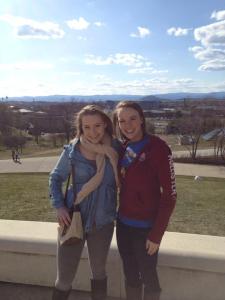 Then Lindsay took us on a short walking tour of the campus. And let me tell you, JMU is BEAUTIFUL. If I were in my cousin’s position, I would look no further. The campus is idyllic in that it is everything you think of when you think of going away to college and staying on a campus. It has that impressive campus feel. Pretty gray brick buildings that match, lots of walking paths, green fields, a quad, statues. Dorms were in clusters with names like Hillside and Fox and the Village. Huge dining halls and other places to eat in almost every building. (Apparently JMU is ranked #4 in best food on campus.) Not to mention the picturesque Virginia mountains in the background.

I couldn’t help comparing everything we did with my experiences at the University of Delaware. I’m not saying that I would have traded those experiences. But maybe had I looked at JMU when I was in high school, I would have considered it. I was tallying up the pros and cons, and as far as I could see in a weekend visit, there weren’t many cons.

**Maybe I should make a note here: this is not, I repeat NOT a paid endorsement for James Madison University. I swear. I was simply in love with the campus.

Miraculously, we had beautiful weather that weekend. Blue skies and sun. We took pictures overlooking the campus and the mountains and with James Madison himself, of course.

We got to meet some of Lindsay’s friends and classmates, and see a few other dorms and apartments. We visited the campus bookstore and bought matching JMU t-shirts. Because everyone needs a bright neon shirt. We got to eat at the dining hall and a place called Dukes. Dining hall food is still dining hall food, no matter where you go, but I was not complaining–they had tater tots and bacon, what more could I want?

We were going to try to see a movie Saturday afternoon, but apparently they were having some electrical issues and couldn’t get the power to stay on. We ended up getting our money back, but I would have to say that was a con for the school. We went to the mall instead. Small mall but at least they had a few good stores. And it was very close to campus, close to restaurants and a bowling alley.

We went out to dinner at a place called Clementine’s. It was fantastic. I wish we could have stayed for the live music but it wasn’t until 10 PM. So after dinner we went to an ice cream place called Kline’s, where they serve their own homemade ice-cream.

On Sunday morning we went to Easter mass on campus. It was really refreshing to see a mass held on a college campus, with students singing and playing guitar.

We left soon after that. And don’t worry, we got home without any mishaps.

There’s a lot I could say about going on this trip with  my cousin looking at colleges.

Or, if you had the chance, would you do it differently? Did your actual college experience hold true to those campus-tour-expectations? If you knew what else was out there, how it could have been somewhere else, would you change your mind?

I like to believe that the choices you make take you where you’re supposed to go. I wouldn’t be who I am or have some amazing people in my life if I hadn’t gone to Delaware.

But when you’re on a beautiful campus, on a gorgeous day, it’s hard not to wonder.